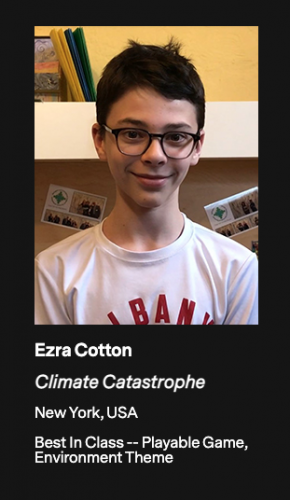 In the world’s first international game-making challenge for kids ages 10-18, a young video game developer from Bethlehem Central Middle School has been named a top winner.

He is Ezra Cotton, a seventh-grader who recently earned a $2,000 grand prize with a video game that challenges players to put their gaming skills and their environmental awareness to the test. His game design was one of only 16 winners chosen from more than 800 entries from 70 countries around the world as part of the “Code Games Challenge.”

The Code Games Challenge is sponsored by XPRIZE Connect which encourages young people to help solve humanity’s biggest challenges through fun games that “envision and ultimately help build a better future for everyone.”

Ezra was awarded the grand prize of a “Best in Class” game that had an environmental theme. He earned the award in the junior division (ages 10-13) of the Code Games Challenge. He joins 15 other global winners in both the junior and senior divisions from the U.S., Mexico, Canada, Saudi Arabia, Pakistan, India, Jamaica, and New Zealand.

“In a time when innovation and creativity is needed more than ever to reimagine the future, I am proud to announce the next-generation winners of our Code Games challenge,” said Anousheh Ansari, CEO of XPRIZE. “This challenge is a testament to the skill, ingenuity and vision of the younger generation of innovators who will be integral in building the hopeful and abundant society we all want to live in.”

The game Ezra designed is called “Climate Catastrophe” which starts out in a polluted city. Players must learn about climate change through simulations in order to save the city. The middle schooler used Gamestar Mechanic to develop his game. Gamestar Mechanic is an online game and community designed to teach the guiding principles of game design and systems thinking to kids ages 7-14.

Ezra said while Gamestar Mechanic was key to designing his video game, it was a school project in spring 2020 that got him thinking about the theme for Climate Catastrophe.

“I had to do a research project on climate change,” said Ezra. “I used a lot of the information from that project in my game.”

Climate Catastrophe earned Ezra high marks for helping players learn about the environment, but it was equally important that the game be playable and be an enjoyable, immersive experience for users. Judges of the Code Games Challenge included some of the world’s top developers and producers of gaming content.

Ezra, who began experimenting with game design and computer science on code.org, said anyone can find his award-winning game and play it by downloading the Gamestar Mechanic app with a Mac or PC.

Considering Ezra’s success in the Code Games Challenge, it’s no surprise that he sees more game design in his future.

“I think that I will continue to make games,” said Ezra. “It is a fun process and I think that it is cool to get to create something that your friends and family can have fun playing.”

Hear more from BCMS student Ezra Cotton below and learn more about the Code Games Challenge.