As the Bethlehem Central School District prepares to take delivery of five electric school buses that will be added to its fleet, the district shared one of the new vehicles with attendees at a statewide gathering of school transportation leaders in Saratoga Springs. Officials from the New York State Association for Pupil Transportation (NYAPT) Summer Conference joined district officials for a ribbon-cutting ceremony marking the start of a historic shift in school transportation in New York state.

The ribbon-cutting took place on Tuesday, July 12 at the Saratoga City Center in Saratoga Springs, NY.

More from the event press release

“The New York Association for Pupil Transportation congratulates the Bethlehem Central School District for being the first Capital Region school district to deploy electric school buses,” said Christopher. “We applaud Bethlehem for taking this giant leap into the electric school bus arena. Our Association members will watch and learn as Bethlehem leads the way in transitioning to a cleaner and quieter school bus fleet.”

The Bethlehem Central School District will be the first Capital Region public school district to take delivery of the road-ready electric school buses. The purchase of five electric school buses was approved by Bethlehem voters in May 2021. The district’s purchase was supported with $1 million through the New York Truck Voucher Incentive Program, administered by the New York State Energy Research and Development Authority (NYSERDA), to reduce the cost of the buses.

The buses will arrive in the district later this month after a thorough procurement process. All five buses will be in use starting in September 2022, in time for the fall school semester.

BC superintendent Jody Monroe said the district’s transition from diesel to electric school buses is a true community effort.

“Environmental stewardship is something the entire Bethlehem community is proud of. We are happy to be able to share what we have learned so far with other school districts to perhaps make the initial leap into electric a little less intimidating,” said Superintendent Monroe.

“Fortunately, we have an amazing team at BC in Chief Business and Financial Officer Judi Kehoe, Transportation Director Karim Johnson, and Director of Facilities Nick Insognia, who have made it their mission to make these new, clean buses a reality for our district,” said Monroe. “Purchasing five electric buses in one year required both community support and a commitment of funding from NYSERDA. We are extremely grateful for the level of support NYSERDA has provided.”

Doreen M. Harris, President and CEO, NYSERDA said, “This is an exciting day for the Bethlehem Central School District with these all-new electric buses being the first to hit the road in the Capital Region under New York State’s New York Truck Voucher Incentive Program. Today’s milestone demonstrates that with a commitment to effect change, we can collectively improve the health and well-being of students and communities alike by providing cleaner transportation options for students across the state.”

When voters in the Bethlehem Central School District first approved the purchase of electric buses in 2021, the district said its goal was to convert half of its bus fleet to electric over a 10 year period. Earlier this year, Governor Kathy Hochul announced all school districts will be required to have fully electric bus fleets by 2035.

“This bus purchase has been a community investment made possible by the tenacity and hard work of our district leaders,” said Board of Education President Holly Dellenbaugh. “We are committed to a goal of wellness, and we believe the health benefits for BC students along with the emissions savings, noise reduction, and overall positive environmental impact will provide an exceptional return on that investment.”

The district will be adding a sixth electric bus next year and is continuing to explore funding opportunities to lower the price of vehicles considered for purchase in future years.

“We know we still have a lot of work to do in order to reach our shared goal of a cleaner ride for all students but we are excited that these buses will be arriving soon in the district ready to transport students,” said Bethlehem’s Chief Business and Financial Officer Judi Kehoe. “The benefits of a transition to clean energy are numerous. In addition to better air quality with reduced tailpipe emissions, these vehicles have lower operation and maintenance costs over time.”

“We are also grateful for the support of citizen volunteers who helped with the feasibility analysis of transitioning to an electric fleet, especially to the late David Burtis, who devoted countless hours to sharing his passion for making this first step a reality.”

Drivers and maintenance staff at BC are eager to receive the buses later this month.

“We have the first phase of our charging infrastructure in place and we are ready to go. Our staff had a brief introduction to the vehicles before the end of the school year and there is a lot of enthusiasm surrounding the transition to electric,” said Karim Johnson, Bethlehem Central School District Director of Student Transportation. “We are always looking to recruit drivers and we see a cleaner, quieter ride to be just as important for drivers as for students. We encourage prospective drivers to look at Bethlehem as being on the cutting edge of new transportation.”

Johnson said the Bethlehem Central School District will hold a district event at the start of the school 2022-23 year to introduce the electric buses to the community.

“Matthews Buses is a proud partner of Bethlehem Central School District and we would like to congratulate the administration, the transportation staff, and the school board in successfully purchasing their first electric buses,” said Hanrahan. “This marks a milestone in the transition from internal combustion engines to electric powered school buses in New York state. School buses have always been the safest means of transportation to and from school for our children and now they are not only safer, they are quieter, cleaner, and more efficient.” 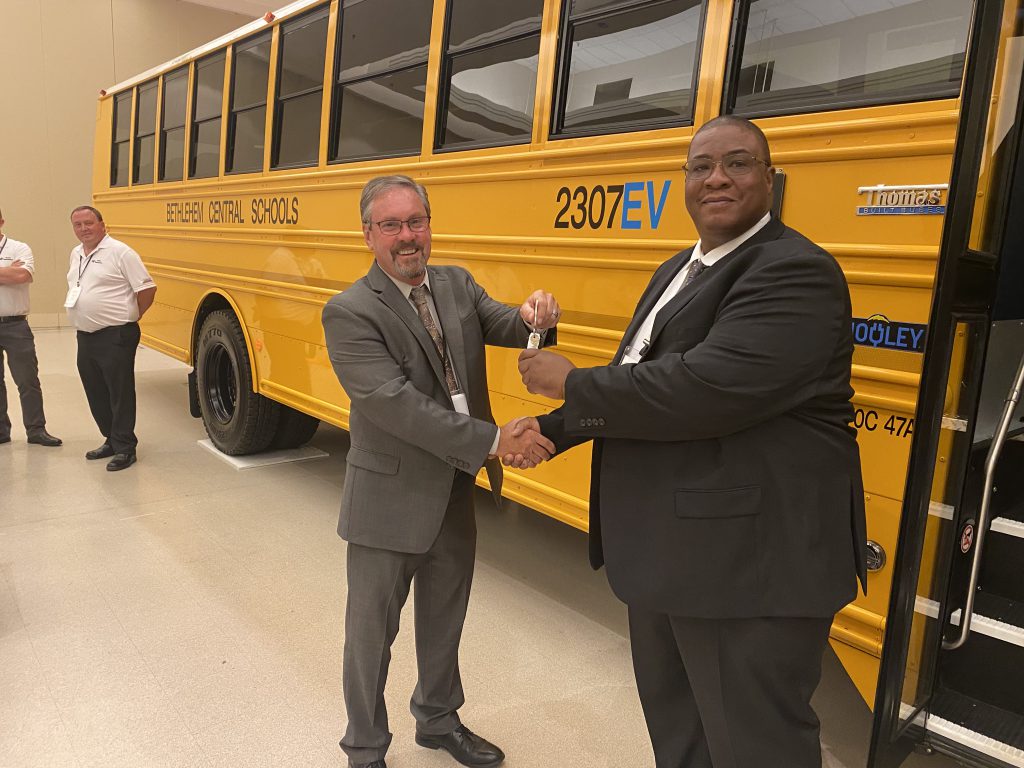 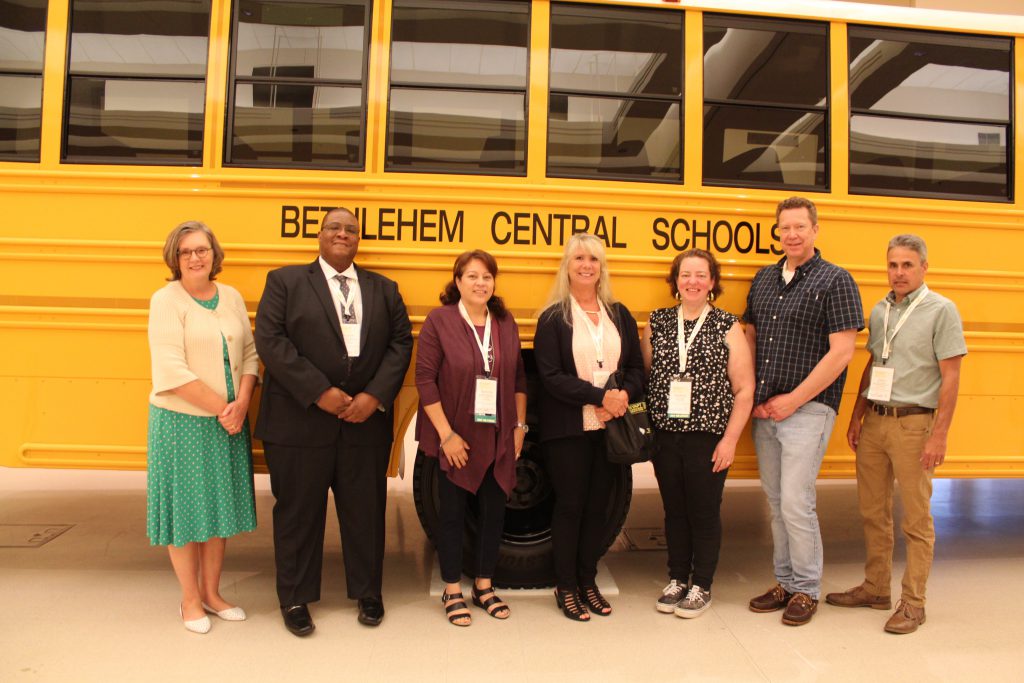 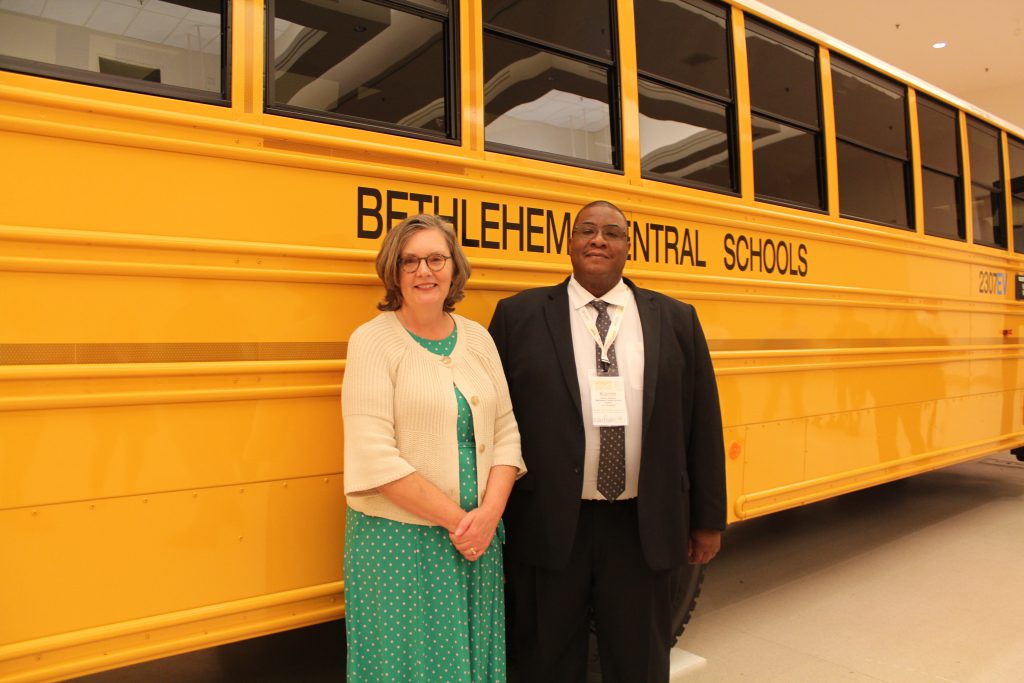