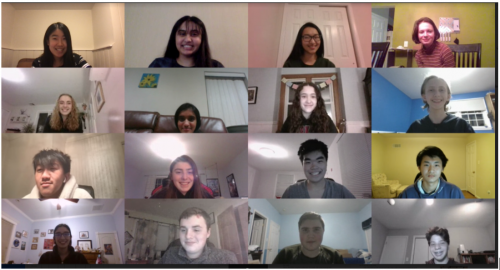 Eight students from Bethlehem Central High School’s Speech and Debate Club have qualified for the New York State Forensics League State Championship Tournament after a busy and very successful regular season. Four of the eight have also qualified to compete in the National Catholic Forensics League Grand National Tournament, one of the country’s most prestigious speech and debate tournaments.

Speech and debate tournaments include various events such as Public Forum Debate, Impromptu Speech, and Lincoln Douglas Debate. There are usually two to three regional and national level tournaments each month during the regular season (from September to March) that students can choose to compete at. Students who score well during the regular season qualify for post-season competition.

The students who have qualified for the New York State Forensics League State Championship Tournament are:

The state tournaments will be held online from April 23 through April 25. This is the third consecutive year Bethlehem students have qualified for the state championship tournament.

Four of the Public Forum debate competitors have also qualified for next month’s National Catholic Forensics League Grand National Tournament, being held May 28 through May 30:

This year, BCHS students competed in 13 tournaments during the regular season. Bethlehem also hosted its own tournament for the second consecutive year, attracting over 40 competitors from across the region.

“I’m impressed with the growth and success of the club this year despite the digital format students have had to adopt,” commented Eileen Turo, the Speech and Debate Club advisor. “This year, students have competed in more tournaments than ever!”

Bethlehem Speech and Debate is always looking for new members. If you are a high school student interested in joining, please email Daniel Zhou (dzhou840@bethlehemschools.org).

Best of luck to all competitors!