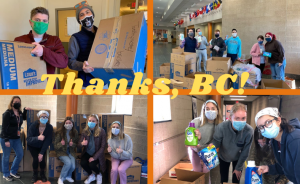 Each spring, homeless shelters across the state see a surge in visitors due to a rise in evictions which traditionally spike once winter ends. This year, it means families who have experienced economic hardships due to the coronavirus may find themselves homeless after a moratorium on evictions expires May 1. So students in the Lab School at BCHS wanted to do something about it.

Earlier this month, the program held a hygiene product drive in conjunction with the annual Lab School Brooks BBQ fundraiser. Due to COVID-19 concerns, this year’s BBQ event was held as a drive-thru and members of the community were invited to drop off a donation of hygiene products when they stopped by to pick up their food. The outpouring of support was overwhelming.

“We were absolutely blown away by the amount of goods the community donated,” says Lab School English teacher Andrew Rickert. “Initially we were just hoping to collect enough to help the Interfaith Partnership of Albany but after organizing all of the goods into boxes, we realized that we had enough to donate to two shelters. So we reached out to Joseph’s House and Shelter in Troy and were able to provide about 12 medium size moving boxes full of items to both locations. We are estimating that we had several thousand dollars worth of products.”

Lab School students are normally required to complete community service hours in conjunction with their academic responsibilities, however, the pandemic has curbed their ability to help others directly. Senior Dayton Cubillo-Dreher who helped to sort the products noted, “how nice it was to do something together which we haven’t been able to do so far this year.”

Junior Ginger Hebert added, “the plethora of items donated was really heartwarming; to know that our community cares as much as we do about those who are going through a hard time, that was really great to see.”

Officials at both centers were grateful for the donations and commented on how happy their clients would be to receive such goods. Andrew Barnes who works at Joseph’s House and Shelter in Troy said their donations alone would, “alleviate the stresses endured during episodes of homelessness for more than 1,700 men, women, and children in Rensselaer and Albany counties.”

The BC Lab School would like to thank the extended Bethlehem Central community for their generosity in making this effort possible.

To learn more about these two organizations receiving the BC donations, visit: